So last week I completed my 5th year hosting Japanese students visiting Australia from a high school in Ibaraki Prefecture.

My position as TA (Travel Assistant……. the Japanese seem to love acronyms) required me to basically travel around the city with 8 of the students helping them navigate their way to the days activities which included Cooks Cottage in the Fitzroy Gardens, Old Melbourne Gaol, St Patrick Cathedral and Parliament House
Despite all our super fun (kinda) destinations my kids were really more interested in shopping for omiyage 😛

At the end of the day to say thank you to us, we were taken out to have a banquet dinner at the hotel, here’s a photo with me and my group, kids even gave me some presents before the whole year level sang us the school song!

Was super good experience for JET and totally got me excited about teaching next year, really thought to myself as I was leaving ‘yeah I can do this’ ^_^

Oh Haizzzzzzzz,
So I thought I might go into my experience in preparing my JET Program application thus far. Anyone who is applying or ever has applied before will tell you this is certainly a  less than exhilarating ordeal.
There are 2 different positions avalible to Australia applicants which are either ALT or CIR, I will be applying for the ALT position as to be a CIR  applicants must be fluent in both English an Japanese. Overall most JET’s are ALT’s with around 10% in the CIR position.
Also note I will be discussing the Australian application process, however since there is generally only a few difference in the process from country to country this will certainly still be useful to aspiring applicants from the US/UK/Canada/etc.
Basically it comprises of around 9 parts depending on your circumstances, I believe the gruelling amount of paperwork that is required of the aspiring JET’s applicant is not simply the result of the Japan being the crazy bureaucratic nation that it is, but is in fact the first hurdle to prove applicants are not total no0bs, have some grasp of English grammar and can follow the complex instructions that the application demands.
To add injury to the wound, Australian applicants are required to submit 3 copies of the entire application for god knows what reason, all which must be meticulously arranged and ordered without the use of any staples!

Anyway this is the check-list iv taken from the 2012 Australian application.
Documents:
l) Application Form
2) Self Assessment Medical Report
3) Statement of Purpose (Essay)
Typed, single-sided, doubled-spaced on A4 paper, not exceeding two pages.
4) Letters of Reference from two referees
5) Certified academic transcript of all tertiary courses

Although these forms came out less than a week ago I have been working on mine for the last 2 months or so. Would that be as I’m on the neurotic side of things….. perhaps, but as application forms are  usually 99% the same it’s fairly safe to use last years forms to get a head start on your application.
Arguably the most important part will be you SoP (Statement of Purpose) which is an essay of sorts in which you will be essentially required to sell your soul to JET in around 700 words , the Australian question for quite sometime has been as follows:
“If you were successful in your application, what particular goals would you like to achieve, and what specific contributions do you think you could make in your position as a CIR or ALT?”
How long did I spend on my SoP, well im actually still working on it and its now in its 23rd inception, luckily for me I have 2 very good friends I work with, one a writer, the other an editor, having them proofread my SoP again and again along with sending it off to current JET’s I have met in the ITIL forum for proofreading it’s really started to shine. With such a tight word limit every sentence has to have a purpose and a reason for existing. I know many applicants write theirs in a night and some are even accepted, for me however i have spent dozens and dozens of hours tweaking it here and there. Will I ever be happy with it, well in certainly proud of what I have written, but content with it…… well that’s ultimately the question.
Acronyms
JET – Japanese Exchange and Teaching
ALT – Assistant Language Teacher
CIR – Coordinator for International Relations
NEXT TIME ON NIHONOMOM….
I am delicious!!!!
Oh by the way you will soon come to learn I have a thing for pugs and think I might just end my posts with them from now on, so to begin with this is my bastard of a dog Fuji, omnomnomnomnom 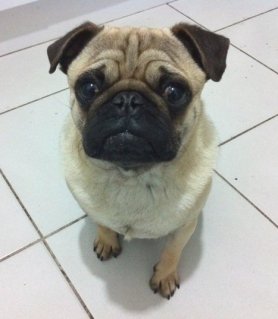 Welcome to nihonomnom (日本おむのむ)
I’ve come to realize no one can pronounce this title until I write it as nihon-omnom then its like duh why didn’t i realized that before!!!
Regardless the purpose of this blog will be to chronicle my journey on the JET Program(me) from initial application through to the day I’m back on Australian soil.
So is this just another JET blog, well yes and no, its primary purposes will be for me to look back on one day and think damn I had an awesome time in my 20s and for all my family and friends back home to see what exactly I’m getting up to so they don’t miss me too much.
I am extremely fond of internet culture and meme’s so expect to be seeing a heap of them in the future!! So what can you expect besides the dribble of a madman in the Japanese countryside. I presume I’ll come up with some exciting little weekly segments to keep you all amused, something along the lines of Japanese Beer/Food/Candy/Product Reviews, local events/matusuri/adventures etc.
Anyhow I might give you a little overview of what exactly the program is all about before we get started.

The Japan Exchange and Teaching Programme seeks to enhance internationalization in Japan by promoting mutual understanding between the people of Japan and those of other nations. The Programme aims to enhance foreign language education, and promote international exchange at the local level through the fostering of ties between Japanese youth and foreign youth alike.
The JET Programme started in 1987 with co-operation from participating country governments. In 2011, there were 4,330 participants in the Programme from 39 countries. So in 2012 the JET Program will be celebrating its 26th year.
There have been quite a few changes in the program this year, the first changes since its inception in fact.
For aspiring applicants the biggest difference would be in the introduction of a sliding pay scale. In previous years JET participants received 3,600,000 ¥ remuneration per year however as of 2012 the new system is as follows:
(Quoted from the 2012 application)
Remuneration per annum is approximately 3,360,000¥ in the first year of appointment, 3,600,000¥ in the second year, 3,900,000¥ in the third year, and, in case the contracting organisation reappoints a participant whose work ability is deemed excellent more than 2 times, 3,960,000¥ in both the fourth year and the fifth year.
This could in part be due to the great financial strain Japan has come under in recent years which was only worsened by the Great Tōhoku Earthquake and Tsunami which occurred earlier this year on 3/11 and of course the Nuclear disaster that has subsequently followed.
As this sliding scale will save BOE’s some money since now participants would need to stay 3 years to make the same total money and from what I understand most JETs do NOT stay past 2-3 years.
For Australian applicants the only other notable difference is that we now have to option to choose whether we would be willing to depart early in April (although the number who does this is minuscule) which I have selected I am willing to do.
So why Japan, well this is a question I have been pondering myself a great deal recently, basically I feel Japan is a part of me that I just can’t get in Australia (to quote the almighty Chris Green) and JET is really what I have been searching for to plug that gap in me. However my view of Japan is still immature, having only visited it twice in my mind Japan is a crazy world of Anime, Samurai and Technology. I realize this is hardly what Japan will actually be like, especially considering I will most likely find myself in the middle of nowhere and receive the ‘inaka placement’ but this too will be an experience I will be all too happy to embrace. At the end of the day I don’t really care where in Japan I’m going, I just want to go to Japan!!!
At this point do I even know if I will get in or not, well in fact we are well off the answer to that question as I am still working on my application (which I’m almost done with) but I thought starting this blog early would be good motivation to keep at it. がんばって!!!
note: I’m gona be whacking in a heap of hirigana and kanji here and there but I’ll do my best to provide translation of the new words I’m learning down the bottom of each post, also my English grammar is terrible so don’t judge me on my Japanese (well you can but if you do your a dick)
出願地獄 (application hell)
Is this a real thing?? Does the kanji even make sense……I dunno
I don’t know much but what I do know is the JET Program application is heaps painful, But that’s a story for another day
Well unless you’re reading this in….. THE FUTURE!!!
Then push next post ya dummy XD