Having become quite the avid cyclist since arriving in Japan, recently along with a couple similarly crazy friends we decided to tackle the ‘Awaji long-ride 150’ (淡路島ロングライド150) an annual 150km bike marathon around the island of Awaji 淡路島.

For those that don’t know of Awaji island it sits neatly in between connecting 2 of Japan’s 4 major islands Honshū and Shikoku. Being very close to Kobe particularly where I live if you’re facing south it’s likely you will catch a glimpse of it on the horizon!

The island is separated from Honshū by the Akashi Strait and from Shikoku by the Naruto Strait. As of April 1998 it has been connected to Kobe on Honshū by the Akashi-Kaikyō Bridge 明石海峡大橋, at almost 2km in length it is the longest suspension bridge in the world (no surprise I can see clearly from my school).

How to get there:
I person cycled to Akashi City 明石市 as its only about 7km from my house, however here is a little diagram showing how much to expect to pay if your taking public transport.
There is a ferry from there that cyclists can use to take their bikes over, as the bridges which connect Awaji with other islands are exclusive open to cars.
One way tickets for adults can be purchased for 450円 and a bike ticket for an additional 200円.

Here’s a pic of the Awaji team (minus our photographer Pete) on the 7am ferry. We departed on the day from Gakuentoshi at around 6:15am, arriving to Awaji within 20 minutes (it’s all downhill).

It was stepping off the ferry on Awaji that the real challenge began, for the most part the ride is quite straight forward and flat, we chose to go around clockwise as the few mountains that Awaji does have around the coast, are primarily on the eastern side of the island.
After a long morning and about 70km of varying giant hills and flats we all met up in the town of Fukura 福良 at around 1pm for lunch, as this is about the halfway point I would recommend it for a stopover, that said the variety of eateries leaves much to be desired (コンビニましょう?!).

Now our ragtag team all had varying bikes (mines actually a mountain bike) and varying skill levels, unlike the professional looking teams in matching outfits we saw perpetually overtaking us. So for more than half of the ride I found myself alone with the road, it certainly gave me a good 13-14hours or so to think (and sweat). By the time we all arrived back at the ferry port having completed the 150km loop the sun had long since set and we managed go jump on the 8:10pm ferry home.

Despite our fatigue and burning asses we decided to man up and tackle the final 7km from Awaji back to Gakuentoshi. We headed straight for a nearby izakaya 居酒屋 (Japanese style bar) where after one beer the long 165km or so of riding finally caught up with us and we all realized the sooner we were in bed the better (I actually fell asleep in my chair :p).

Anyhow it was a crazy 15 hours or so of pain, however I couldn’t recommend it highly enough if your an avid biker in Japan! In fact my morning ride to school now seems far easier since (it might just be in my head), next challenge……. Lake Biwa!!

Today at my Tuesday shougakkou we had a 避難訓練 (disaster drill), after a speah from the visiting fire fighters. The ‘Kobe City Fire Band’ put on a brass band concert for the students, mid way through the set the conductor asked the kids if they like Kyary Pamyu Pamyu before suddenly started busting out Ninjari Bang Bang めっちゃびっくりした！

Check it out below for all the crazy goodness! 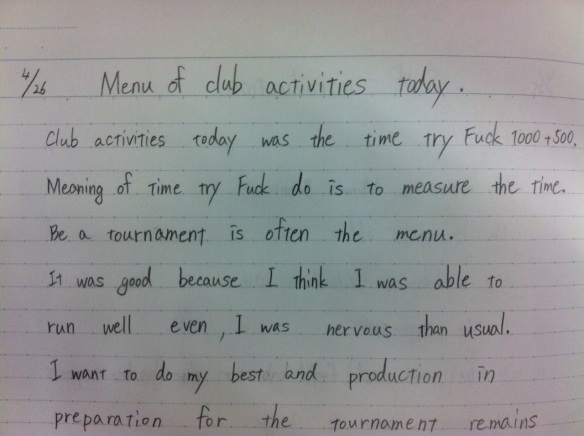 So this isn’t actually from one of my students but a good friend of mine sent me this the other day, completely baffled as to what one of her students had written.

Any ideas deciphering this little gem…….. No well here’s a great example why you shouldn’t blindly use google translate without double checking!

In this case the student had google translated “タイムトライヤル” (time trial) … However google split the ‘trial’ into ‘try yaru’.

And so of corse google translated yaru into “fuck” hence “time try fuck”.

Bringing you yet another yatsuhashi instalment of The Mochi Diaries, this is Chapter 14: Haru Yatsuhashi 春八つ橋.

The Mochi Diaries are now a monthly feature in the ‘Hyogo Times’, you can find this article published on their website HERE!

Although the sakura have come and gone, spring is certainly in the air and all over Japan at the moment (my hayfever can attest to that) and so during a recent trip to Osaka I decided to pick up a box of the spring themed variety of yatsuhashi (speciality mochi of Kyoto, see chapter 2). The box contained two separate and unique sakura flavoured variations alongside the more traditional cinnamon and matcha flavours.

Now these guys are basically a yatsuhashi themed take on ‘sakura mochi’, a popular spring time sweet. Pink in colour and containing a sweet red bean filling, sakura mochi come wrapped in an edible salted sakura leaf. Being quite a fan of said seasonal mochi offerings (they come with my highest recommendation) how were the yatsuhashi going to stack up in comparison?? Unfortunately I’m going to have to admit not particularly well. Aesthetically they are quite attractive, the usual yatsuhashi fair, less than opaque mochi with a pale pink sakura flavoured centre peeking through. The taste, however, was less than amazing. Although remaining faithful to the delicate texture that makes yatsuhashi what it is, I really found the ‘sakura’ aspect to be much too subtle and entirely underwhelming. If anything the entire time I was eating them I felt like I was chewing a slightly sweetened pillow that by all rights should have been amazing! A nice yet insufficient addition was the inclusion of a couple of sakuradzuke 桜漬け (pickled cherry blossoms) which added a nice, salty contrast. Regardless, next spring I’ll pass.

As opposed to the sakura centre of the version above, these ones instead had a sakura inspired mochi coating around a more or less kosher red bean filling. Once again though, I found the sakura to be too underwhelming, leaving them more or less indistinguishable from their cinnamon counterparts. They were rather pretty (again) from a purely aesthetic viewpoint, sporting an appealing pale pink colouring which was rather fitting for the season. At the end of the day however, I was far from impressed. I had thought it was pretty hard to screw up the winning formula that makes yatsuhashi what it is, apparently I was mistaken. That aside, they are still perfectly edible, I just personally wouldn’t be giving these ones in particular as an omiyage to anyone I really liked!All said and done, I still ate them all hungrily, but in the future I’ll stick with the ever-reliable cinnamon variety. 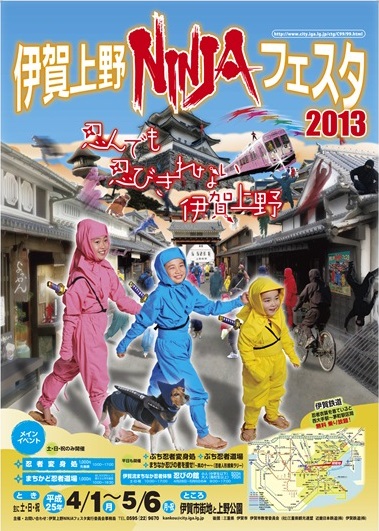 Iga Ueno Ninja Festival 伊賀上野 NINJA フェスタ is a 5 week event that is run by the city of Iga 伊賀市 in Mie prefecture 三重県 from April 1 to May 6 each year. When the suggestion came about to hire a car with a couple friends and drive down for the weekend I was more than keen to get my ninja on!

Departing in the wee hours of the morning we made the trip from Kobe to Iga (around 130km) in about 3 hours taking the extremely expensive toll roads and at times thinking we were going to die due to the ‘skilful’ driving of ‘Lady Wei’. Generally its crazy to drive in Japan due to the cost, however with 4 people in the car the split cost was comparable to what the train fare would have been and far easier since Iga is fairly inaka.

Post arrival we were met up with another 20 or so JETs from across Kansai who had also been invited to participate in the days festivities, before being greeted by the Iga city JET who took us to the city hall where we would receive our ninja costumes for the day!

Now I assure you although the ninja garb appears to be quite simple, each outfit was made up of 9 separate parts that needed to me meticulously put on in just the right way, lets just say thank god they had helper ninjas to dress the clueless gaijin XD

After suiting up the city had organized a walking ninja tour for us, which included a stop at the Iga Ninja Museum 伊賀流忍者博物館. Dedicated to the history of the ninja and ninjutsu, it showcases a wide array of genuine ninja tools and weaponry, in addition it contains a model ninja village where we were lead around by female ninja who demonstrated all the secrets of the house that could be used in case of intruders, such as hidden weapons, secret doors and deadly traps!

After the tour of the village concluded, our next stop was a live ninja show! Hilariously cheesy it featured shuriken throwing demonstrations and a number of mock ninja battles demonstrating the various ninja fighting techniques and weaponry. The best part being that with each fictional kick, punch or sword slash there was an accompanying ninja battle sound effect and often smoke bombs! ALL THE WINNING!

The afternoon we occupied with heading up to Iga Ueno Castle 伊賀上野城, a cute little castle perched upon a hill, its elegent design resulted in it often being refered to as White Phoenix Castle however it is a reconstruction of the original that was destroyed by a storm in the 16th century. 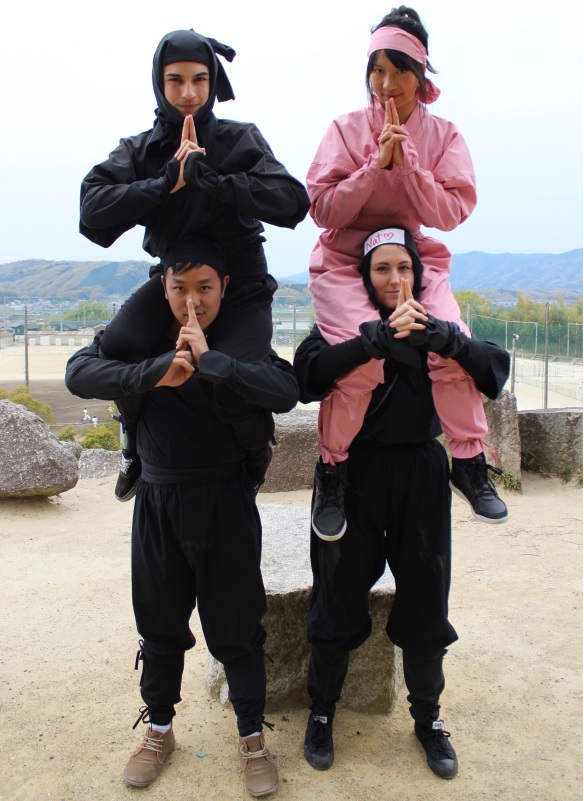 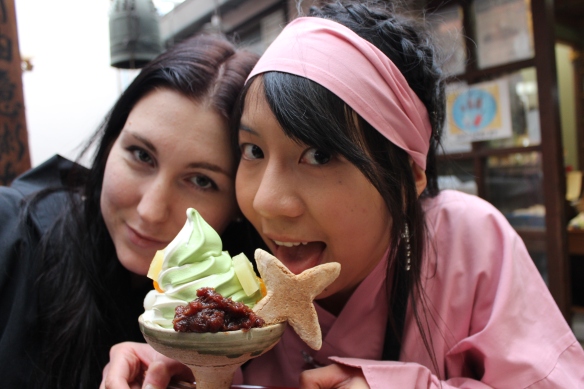 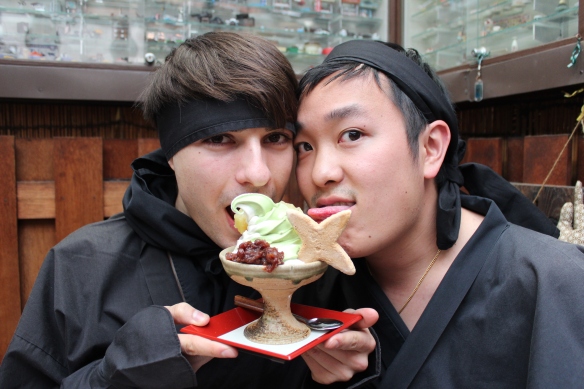 To conclude the days festivities, we headed to the ninja café to sample some ‘ninja deserts’ with our fellow ALTs come ninja. The four of us decided upon the shinobi parfait 忍びパフェ, the café’s speciality which came with an edible shuriken 手裏剣 (throwing star). 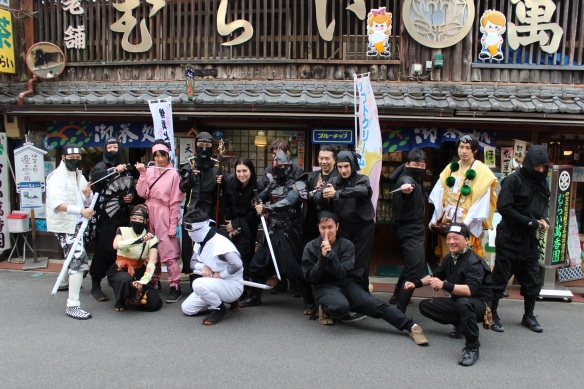 During the festival the entire city of Iga is filled with these ninja mannequins that are hidden everywhere you look.

Finally although it was very convenient for us to drive since we saved a huge amount of time and headaches with transfers, I would have liked to had had the chance to ride the ‘ninja train’ LOOK HOW KAWAII IT IS!!! (and free for ninja to ride during the festival. If your ever in Kansai around April head down to Iga, its certainly worth the trip to the countryside to get to be ninja for a day!